We have been hearing the term ‘toxic masculinity’ a lot lately, especially with regard to men and mental health. For me, I am not sure it is at all helpful to link the word ‘toxic’ to masculinity. Masculinity sums up the qualities and way of being attributed to men, however, both males and females can occur as having masculine traits, or behave in a masculine way. What is toxic is the way society judges what it is to be male or female. Masculinity is often associated with characteristics such as being tough, unemotional, competitive and aggressive. We are brought up to believe that to be a boy means we cannot cry, we have to stand up for ourselves. Boys play with ‘action man’ figures, guns, and are good at sport, whereas girls play with dolls, have tea parties with toy tea sets and help mum in the kitchen. It is this paradigm of what it is to be a boy or a girl that leads to the beliefs that are toxic.

Masculinity is not toxic. It is the judgement of what it is to be a man, that leads to men keeping their feelings and emotions locked away, that is toxic.

It is the way society places so much importance on the male role as one of dominance, power, being the provider and being in control that develops like a toxic seed in young boys and grows into the vile weed of ‘toxic masculinity’. It really has become such a problem that it could be regarded as pandemic. Recently in the U.S the ‘Journal of Family and Marriage’ published an outrageous ‘study’ saying that you’re destined for singledom if you don’t fit into the category of ‘marriageable men’ and by ‘marriageable’ it means ‘economically attractive’. The report goes on to claim that there is decline in U.S marriages because men are becoming less ‘economically attractive’ to potential partners. This ridiculous report is just one example of the many ways that society allows the weed of toxic masculinity to thrive. Not only are men now more and more obsessed with looks, body shape, looking ‘buff’ and personal grooming, they now have to make sure that they can ‘provide’ for their future partner financially. This stupid and outdated point of view is still very much alive and it is this kind of report that provides the fertiliser for toxic masculinity to grow.

This is just one small example but there are so many reference points out there in our society that are linked to religion, the patriarchal corporate world, politics, media etc, etc. Men are bombarded with pressure to conform to the stereotypical view of what it is to be a man. I thought that it was bad in the west, but since working with many men here in Asia I see it just as bad here and in some cases it is worse, because Asian culture has always had the male as the dominant provider and the female as the mother and homemaker. This shows up everywhere, in billboard ads, TV ads and even in schools. It triggers competitiveness, inequality, gender bias, fear, stress, anxiety, depression and leads to a rise in suicide deaths. Yet still it is all ‘accepted’ and hidden away by society. This is why it takes so much courage to come and seek support, to approach a life coach or psychotherapist, because if anyone found out (not least of which your wife/partner) you would be seen as weak and less of a man. 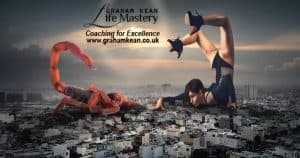 Picture: Young male, dressed as female, representing the hidden softer side of men, the forbidden male qualities usually associated with women. The scorpion represents the toxic poison suffered by males in society today.

“In Singapore it is considered a serious issue in recent years, with the rate of suicide increasing for all demographics. It is the leading cause of death for those aged between 10 and 29 years old. Males account for the most suicides at over 66.6%”

Like most issues of mental illness and death, suicide is generally viewed as a taboo subject in this part of the world. This clearly hinders efforts to reduce suicide rates. Some argue that changing public opinion on clinical depression and similar mental disorders may be a huge step in improving the rate of suicides but it is clear that it will take more than just that, toxic masculinity is far reaching, it starts young and becomes more toxic as you get older.

As a life coach I work with the results of this in nearly all my male clients. The male clients that have the courage to come to me and ask for support, know that they are struggling with their anger, stress, anxiety, self-esteem, self-confidence or with depression. The problem is that most men simply can’t summon up that courage, they don’t want to own that they are struggling, they are fearful of showing up as weak, they are scared of the judgements of others, especially at work and in the family. They push their issues down, they numb the pain with alcohol and put on a ‘false self’ to survive. I had one client who felt pressured to go out after work and drink with his colleagues because he was so fearful of ridicule if he didn’t. It was even more concerning because he was very worried about his alcohol use and concerned that his marriage was suffering because of the constant late nights. Another client had become obsessional with working out, with looking good and having the right clothes for work, he invested huge amounts of time in going to the gym and spending way too much money buying unnecessary clothes just so that he would be admired at work. The cost of this was his emotional health and his relationship, not least of which his financial stability. It all stemmed from being bullied at school about his weight and non-designer trainers. This developed a painful pattern that ruled his adult life and without our coaching work he admits he was heading for suicide. This is the ‘toxic’ part of ‘toxic masculinity’.

Sometimes even when men step up and come for coaching the work can become very challenging. I have had male clients back off and withdraw from their coaching process. It is always the shadow of toxic masculinity that consumes them and pulls them back into their old patterns of shame and guilt. In most cases they don’t even want to admit they are working with me as a coach, like it means they are ‘weak’. However, we can always work it through and they come out the other side with a new and powerful sense of self-worth with a renewed strength, vision and purpose. Many of my clients are proud that they have got help and go on to support others by encouraging them to come and see me for coaching so that they can also benefit.

Ridding yourself of toxic masculinity

As men we must all support each other and interrupt this painful cycle. We must talk about our feelings, our fears and our problems, it is the only way to deal with this. I know it is hard to do this with your friends, colleagues, bosses and even your loved ones, but talk you must. Allowing your vulnerability is not a weakness, it is a key element of any good leader because being vulnerable allows for creativity and change. It is only through communication, through sharing, through empathy that you be able to transform the painful cycle of so-called toxic masculinity. This is where working with an experienced, qualified ‘male’ coach will help. As a coach I am on the edge of your pitch as you play your game, I am not your friend, boss or colleague. I am able to uncover how it is you become hijacked by this powerful shadow, I have been there, I have suffered and I can support you in ridding yourself of the ‘toxic’ shame and embracing what it is to be male. The alternative is stress, anxiety, depression and avoidance, which leads to addiction, illness and ultimately death.

If after reading this you recognise this in yourself and you can see that you are limited by your toxic masculinity then I will be able to work with you to transform it and gain release and freedom.