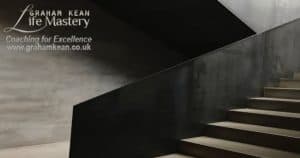 Also known as the ‘five stages of grief’, the grief cycle model is a useful perspective for understanding our own and other people’s emotional reaction to personal trauma and change, irrespective of cause.

Denial is a conscious or unconscious refusal to accept facts, information, reality, etc., relating to the situation concerned. It’s a defence mechanism and perfectly natural. Some people can become locked in this stage when dealing with a traumatic change that can be ignored. Death of course is not particularly easy to avoid or evade indefinitely.

Anger can manifest in different ways. People dealing with emotional upset can be angry with themselves, and/or with others, especially those close to them. Knowing this helps keep detached and non-judgemental when experiencing the anger of someone who is very upset.

Traditionally the bargaining stage for people facing death can involve attempting to bargain with whatever God the person believes in. People facing less serious trauma can bargain or seek to negotiate a compromise. For example “Can we still be friends?..” when facing a break-up. Bargaining rarely provides a sustainable solution, especially if it’s a matter of life or death.

Also referred to as preparatory grieving. In a way it’s the dress rehearsal or the practice run for the ‘aftermath’ although this stage means different things depending on whom it involves. It’s a sort of acceptance with emotional attachment. It’s natural to feel sadness and regret, fear, uncertainty, etc. It shows that the person has at least begun to accept the reality.

Again this stage definitely varies according to the person’s situation, although broadly it is an indication that there is some emotional detachment and objectivity. People dying can enter this stage a long time before the people they leave behind, who must necessarily pass through their own individual stages of dealing with the grief.

People do not always experience all of the five ‘grief cycle’ stages. Some stages might be revisited. Some stages might not be experienced at all. Transition between stages can be more of an ebb and flow, rather than a progression. The five stages are not linear; neither are they equal in their experience. People’s grief, and other reactions to emotional trauma, are as individual as a fingerprint.

In this sense you might wonder what the purpose of the model is if it can vary so much from person to person. An answer is that the model acknowledges there to be an individual pattern of reactive emotional responses which people feel when coming to terms with death, bereavement, and great loss or trauma, etc. The model recognises that people have to pass through their own individual journey of coming to terms with death and bereavement, etc., after which there is generally an acceptance of reality, which then enables the person to cope.

The model is perhaps a way of explaining how and why ‘time heals’, or how ‘life goes on’. As with any aspect of our own or other people’s emotions, when we know more about what is happening, then dealing with it is usually made a little easier.

(Based on the Grief Cycle model first published in On Death & Dying, Elisabeth Kübler-Ross, 1969. Interpretation by Alan Chapman 2006-2009.)

There is no formula when dealing with grief, what is most important is that you reach out for support. Find out more about coaching for grief.